> About carpets> Symbolism in carpets

Oriental carpets don't tell their history straight away. They take us to the world of ideas and meanings hidden behind the symbols adorning them. Here nothing is accidental and the patterns are more than simple ornaments. In order to take a glimpse of this magical world one has to learn the symbolism of the woven ornaments. 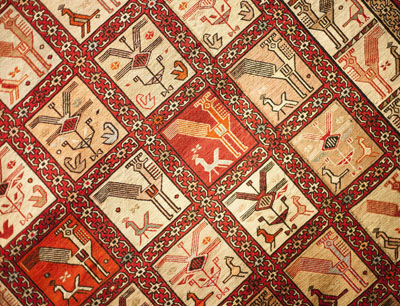 Ancient cultures ascribed beneficial properties to different animals. It is not surprising then that carpets are often decorated with their geometric shapes. For many centuries birds were considered the connectors between the earth and the sky. Already in Mazdaizm (pre-Islamic religion) birds were revered as a symbol of the good god Ahura Mazda, who fought the forces of evil. And yes: Eagle symbols are woven to protect against evil spirits. Rooster protects against charms and symbolizes birth. The ram is yet another animal which protects against evil spells. When its symbol adorns the carpet near the symbol of a bird they create a dual symbol, which promises rainfall. The peacock, in turn, is an incarnation of the Sun, and as such symbolizes immortality and resurrection.

Symbolism: the tree of life, an axe and a swastika

Asian peoples worshiped plants, seeing them as a rare gift of their land, which could grow thanks to water - an invaluable resource in the desert. This cult is connected with the symbol of the tree of life - a bridge between the three zones of the cosmos; underworld (roots), the earthly world (trunk) and the sky (which the canopy touched). In Mazdaizm there was a belief in the existence of the plant whose juices allowed you to prepare a potion which could defeat death. The symbol of the tree of life appears on the carpets woven by various peoples of Asia.
A double-bladed axe symbolized the two sides of power: on one hand the destructive power, but on the other creative. The axe was also a symbol of the metal from which it was forged. However, one of the most common ancient symbols is the swastika, a complex pattern symbolizing the Sun - it was usually placed in the central medallion of the carpet. It was one of the most commonly used symbols in Persia, taking the form of eight-armed star.

A fire temple, hands and numbers 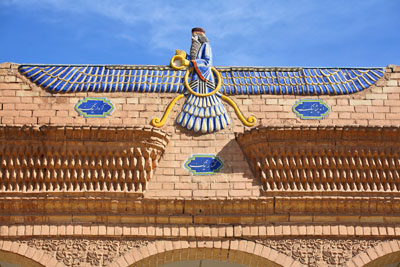 The sculpture representing Ahura Mazda from the Fire Temple in Yazd. This ancient god is a common motif in Persian carpets.

This complex shape brings to mind the symbolism of a polygonal temple - having twenty-eight or twenty-nine walls. It is the symbol of the fire temple and it appears only in Persia. Geographically, the more universal symbol is the palm, whose five fingers serve to the Muslims as a reminder of the five principles, the five daily prayers and the five major figures of their religion.
Numerology woven into carpets is also linked to beliefs; namely to the attribution of magical powers to certain numbers. The strongest symbolism is connected to the number 4, which symbolizes the four directions, the four seasons and the four elements. In carpets this number most commonly appears as four triangles forming a central medallion. This is most likely derived from the ancient Sumerian depicting the moon as being divided into four parts.